This is the most important system to take care of, and on a daily basis.
Why should I care?
We can observe from the many studies over the last 30 years that probiotic bacteria complete and definitely uphold a 'health cycle'. If we categorize all the defense systems of the body, we observe that there is a cellular one (immune system protecting cellular environment) and a molecular one (antioxidants neutralizing free radicals). These require building blocks, which probiotic bacteria enhance from our diets, but pathogenic bacteria that secrete toxins cause stress on these cells and empty their defenses. Simply, taking care of your bacterial population dramatically alters disease.

If you control the food, you control the population.
Some type of food actually feed bad bacteria, while other types exclusively feed beneficial bacteria. Just like roots of a tree has an ecosystem of bacteria, so do you. Our roots are internal, so you can imagine the gut as a root system designed to absorb nutrients and the bacteria help this process thrive... well, actually, they make it happen. This is an evolutionary symbiotic relationship; the human body has a forgotten organ that coats the entire digestive tract; from the mouth to the anus. A fine coat of bacteria. But the population is affected directly by food consumption; Sugar and complex carbohydrates feed bad bacteria, while vegetables and some fruit feed beneficial bacteria. 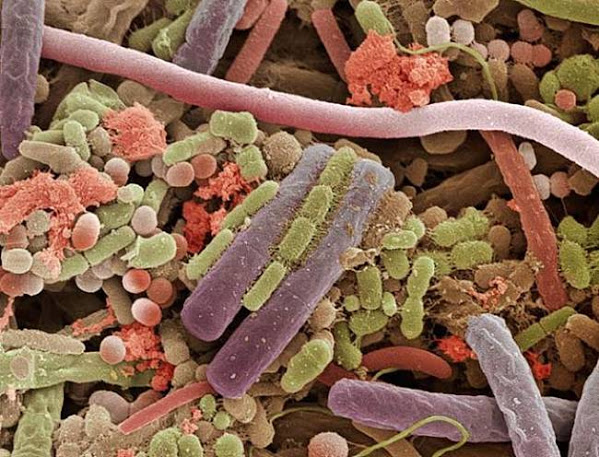 Bacteria are one of the oldest organisms on the planet. They are single cell organisms without a nucleus, aka prokaryotes, and certain species have evolved to produce oxygen by consuming carbon dioxide. The bacteria are the cause for the rise in oxygen in the atmosphere millions or even billions of years ago. This rise in oxygen accompanied an evolution of another bacteria into a new species, of which had made a remarkable effect on organism patterns and life. This species of bacteria, like the Mitochondria, made their way into a community of other bacteria to form a Eukaryotic cell; an evolved cell with the capacity to adhere to other cells of the same nature. Thus a multicellular organism evolved. 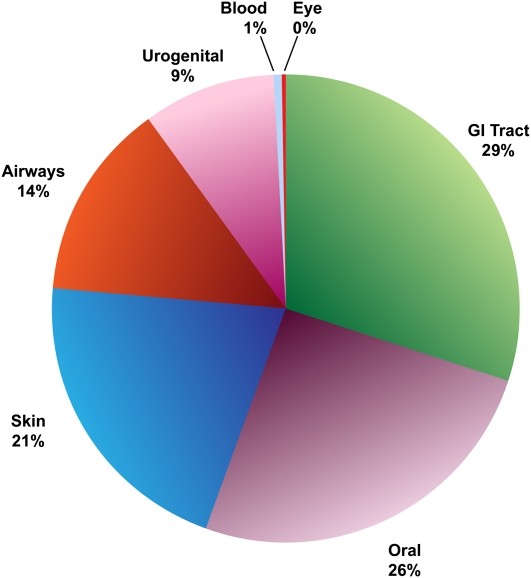 There are 10 times more bacteria on the human body, then human cells. If we have approximately 1 trillion cells; from brain cells, skin cells, liver cells, heart cells, gut cells, muscles cells etc., you will find 10 trillion bacteria on and in the body. Now, you cannot find them in the blood or on your eyes, as the body keeps those zones sterile for the function of the system (immune cells etc.). However, in some cases bacteria find their way in, usually after an injury or consumption of food that promote a leaky gut (i.e. grains). On the right is a pie chart representing the percentage of bacteria you can find in and on your body [taken from here].

As you can deduce from the chart, bacteria are only present on surfaces that are in contact with the outer world, and the largest percentage is in the gastrointestinal tract (29%). Nevertheless, bacteria can be found in other areas as well, and may very will be connected to that areas healthful state.

Dysbiosis
A condition of imbalance in microbial populations on or in the body is called Dysbiosis. The germ fear in the beginning of the 1900 century brought many of the public to believe that bacteria are only pathogenic. Many people lack the knowledge that there are probiotic bacteria, and many who have heard of probiotic bacteria lack the perspective on the depth of their importance to the physical-biological body's health. They are our Extracellular Defense System, and I will cover why and how.

Pathogenic bacteria, like probiotic bacteria, seek food for them to nourish and reproduce. Some pathogenic bacteria can thrive on free sugar in the diet, others make the effort to harm the host's cells in order to thrive on minerals like iron. Bacteria are everywhere, also found in radioactive tanks, where people presumed life could not exist.

These pathogenic bacteria are harmful for the functionality of many organs, like the stomach; where Helicobacter Pylori has been observed to destroy parietal cells in charge of producing a specialized enzyme called Intrinsic Factor. This enzyme is responsible for transporting B12 across the gut lining into the bloodstream. Adults and children with this infection suffer from B12 deficiency, even when they take supplements or eat a B12-rich diet[1][2]. A probiotic supplementation resolved this issue[3].

Control the Food and you Control your Health

Population has always been controlled by food, and there lays the cause for pathogenic bacteria overthrow of probiotic species. For example; a cow consuming a grain diet develops a dominant species of E. Coli and a specific harmful strain (Escherichia coli O157:H7) that thrives on the complex carbohydrate diet supplied by the grains, and as a by product they expel toxins and methane gas[4]. This causes severe inflammation in the cow's complex gut system (rumen), which impairs their health and their value of parts and by products they produce for the industry. However, it only takes 5 days on an evolutionary diet of grass (i.e. grass-fed diet) to observe a 1000-fold decline in the E.Coli population[5].

Lets observe a case of a human trial published December 13rd, 2012[6]. An obese person is found to contain a pathogenic bacteria strain called Enterobacter, that composed 35% of the gut microbial composition and is observed to secrete endotoxins that cause inflammation in the gut's environment. After 23 weeks on a diet of whole grains, traditional Chinese medicinal foods and prebiotics, the strain of bacteria was reduced to "non-detectable" levels, "during which time the volunteer lost 51.4 kg of 174.8 kg initial weight and recovered from hyperglycemia and hypertension". 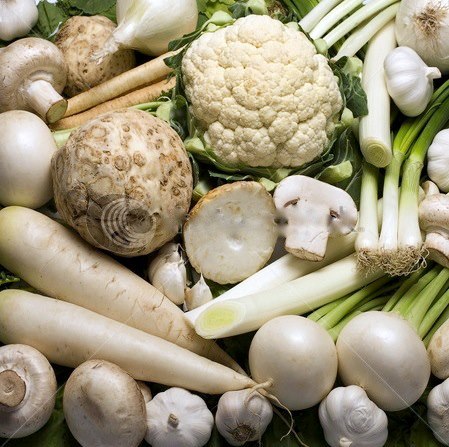 Food that Strengthen your Probiotic Population

Now, prebiotics are food that contain resistant starch, usually a complex carbohydrate called Inulin, that is present in many vegetables and some fruit, and it exclusively feeds probiotic bacteria[7]. These are food like Raw Chicory root with 64.6% inulin (highest content), Raw Jerusalem Artichoke (31.5%), Raw Dandelion Greens (24.3%), Raw Garlic (17.5%), Raw Leek (11.7%), Raw Onion (8.6%), Raw Asparagus (5%), Cooked Onion (5%) and Bananas (1%)[8][9]. Though, cacao has also been found a prebiotic[10] and it's medicinal effects are vast (but sugar harms it's medicinal properties[11]).

The list of benefits from probiotic bacteria is long

Some strains produce B vitamins(including B12[12] and B9[13]), some produce precursors to CoQ10, some inhibit toxins and heavy metals. Like I said, the list is long. What is evident, is that these probiotic bacteria live in a symbiotic relationship with the biological organism. The soil in the ground is a biodiversity of bacterial organism, that break down materials and makes minerals available for the plant to uptake through their roots. Same thing applies to humans or any other animal (like a cow and it's rumen), these probiotic bacteria digest plant matter and release the contents of cells that our gut cannot digest on its own.

These probiotic bacteria are our Extracellular Defense System and secondary digestive system. We require them to not only to break down food our gut is unable to, but to protect the inner environment (gut, mouth and airways) and outer environment (skin) clean of pathogenic bacteria. Since about 80% of your immune system is in your gut, taking care of the gut environment is crucial for a functional immune system in that area. Lactobacillus bacteria produce Lactic acid, that makes an environment favorable for immune cells. Lactate, from lactic acid, has also been observed to be the preferred energy source of neurons (brain cells), unlike what was previously thought was only glucose[14]. 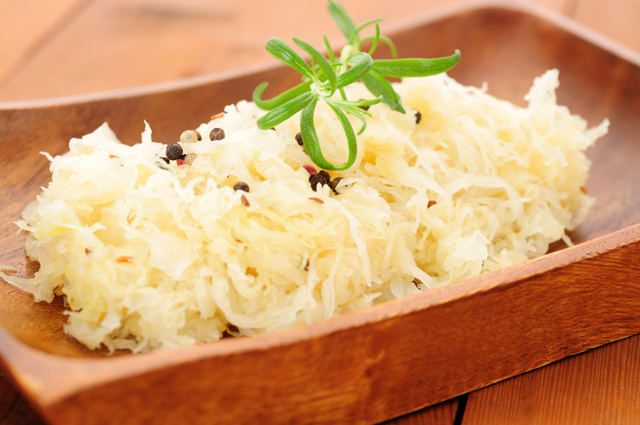 If you get a flu or cold, and your body is fighting off an infection, then you certainly have a condition of bacterial imbalance (Dysbiosis) and that means you were eating something that favored the disease causing bacteria, and now all you need is to eat something that favors the pro-life bacteria. You can also simply eat fermented food, like Sauerkraut, Kimchi and more.

You can hear an interview of Dr. Natasha Campbell-McBride by Dr. Joseph Mercola (from Mercola.com). She is considered the authority in all that has to do with probiotic bacteria, as she has written a book called GAPS (Gut and Psychology\Physiology Syndrome) where she details her cases of curing many diseases by placing patients on a strict protocol.
Dr. Mercola Interviews Dr. Natasha Campbell-McBride [YOUTUBE LINK]

For further literature, I suggest reading this webpage: Probiotic bacteria: What are they? | Probiotics Help

For further articles of mine touching upon this subject, check out these following articles:
Books Worth Reading (A book called Gut and Psychology Syndrome)
The Bacterial Entity and the Hunger for Connection