The Difference between Internal and External Fermentation

All living organisms on the lower rungs of evolution eat materials and expel wastes - byproducts. Mankind lives within an animated organism. One of which is bound to the laws of karma - action and reaction - whereas, if you eat, your body will have to digest and eliminate.

But what is your body? Who is doing the digesting? How can food affect the organism? and what can their byproducts cause? 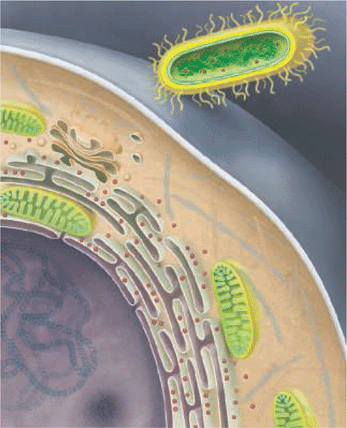 You are a bacterial entity.

A few of your organelles inside your cells have been identified as bacteria, who gathered favorably together to form tribal life of mutual and beneficial trade amongst each other. Their symbiotic relationship happened to elicit an evolutionary benefit, one that ended up with the erection of city walls - a membrane - from which the governor of the city, i.e. cellular consciousness, can direct traffic and respond to environmental stimulus for the benefit of coordinated multicellular expressions.

Not only are you made up of trillions of these tribal bacterial cells, but you are covered by 10 times more single cell microbes, who live side by side with the cells. These microbes, ranging up to 1000 different species, create amazing benefits for the cells of your lungs, your gut, your skin and your hair. When they are in good shape, your epithelial cells (the surface cells) are enjoying great mucus lubrication and availability of adequately digested nutrients. From epigenetic research we now know that substance and food causes buttons to be pushed on the cell membrane, which in turn stimulate gene behavioral changes. The nucleus was once thought to be the brain, but it is now viewed as the gonads of the cell, as you can remove it from the cell and the cell remains alive. The brain is actually the membrane - mem-brain - which received stimulus from either the inside or outside of the cell, and then transmits a cascade pathway that switches genes on and off.

The genes, which hold the keys to protein and enzyme synthesis, dictate what information is available for transcription. It is like a computer code of zeros and ones; zero is off and one is on - just like a switch. The genes that are off do not express themselves chemically and biologically, as well as behaviorally. Genes that are turned on are expressed, and it's evinced by the behavior of the cell. The nucleus is likened to a computer hardware, that holds a library of data, and the membrane as a keyboard that accesses the database.

Bacteria have DNA as well, just like the bacterial organelle inside the cells - the Mitochondria. These bacteria also have membranes, which means that they are just as much bound to this law of stimulation and expression (sounding like the law of Karma).

It is well known that certain types of substances can cause an organism to advance towards it to consume it, or express the contrary and stay away from the substance, as well as take steps to protect itself from the nature of that substance. 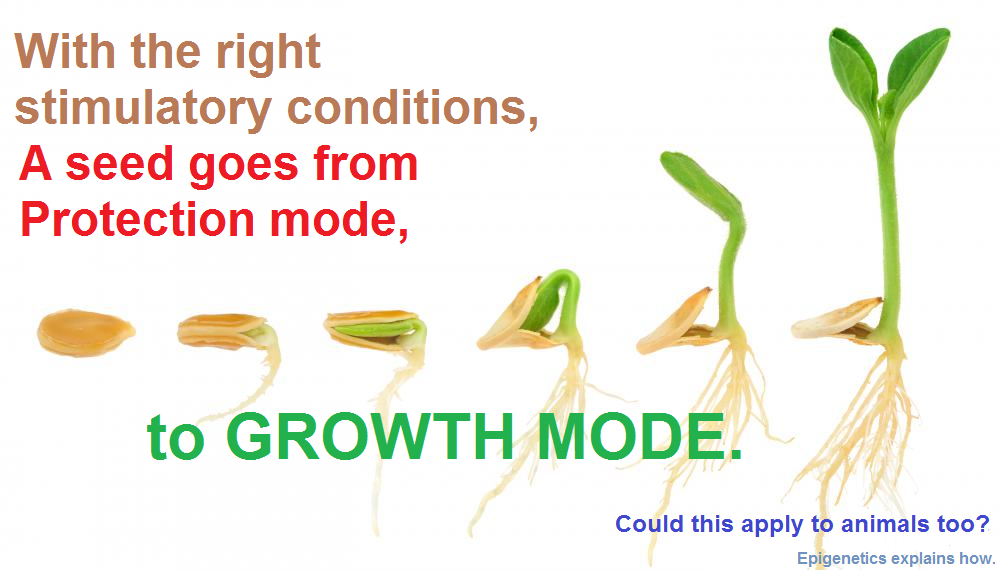 Some substances can cause an acid environment, like the crystalline form of sugar (pure glucose), which is the most acid forming substance consumed today (grains and starches come next). When a living organism, which operates in a slightly alkaline environment, is exposed to a drastic change in the environment, as much as a toxic shift in the acid direction, the organism's membrane delivers a cascading message to turn off the "growth and healing mode" in favor of the "protection mode", also known as "The inflammatory response".

Free roaming bacterial populations are the first to come in contact with ingested substances. They have the capacity to create digesting enzymes, since they desire the utilization of raw materials, and they expel byproducts.

When free roaming bacteria digest a substance, it requires the utilization of complementary nutrients like water and minerals, in order to effectively break apart the atomic bonds between macro-nutrients (starches, fats and proteins). 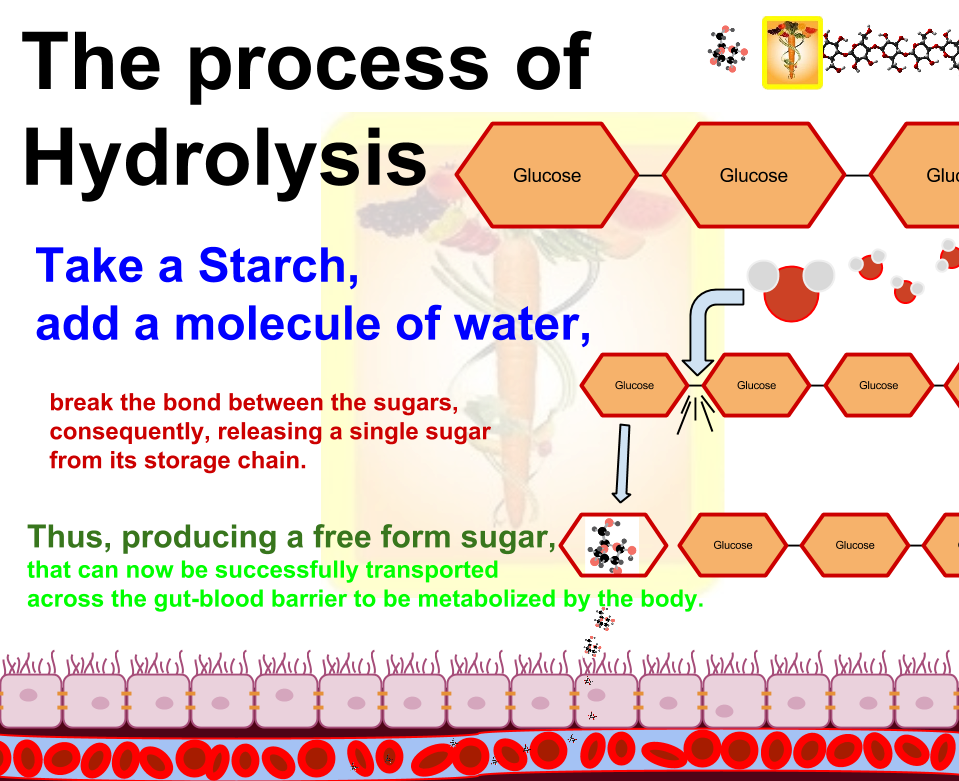 Since nature stores single sugars as long chains of sugars, aka starches, when the need arises to utilize the sugars for energy purposes, which is bounded in an unavailable form as a starch, the bacteria and cells release digestive enzymes that quicken the breakdown of the bonds. In the process, gases are released as the sugars become available as a single molecule.

We know that the gut will not allow starches into the bloodstream, only simple sugars, so this step is always necessary for sugar to become available.

Not only does the environment in the intestines become highly acidic from the sugars, but the released gases causes pressure and symptoms of bloating. Stress on cells, whether from the acidic factor or gases, switches many cellular and bacterial growth modes into protection mode. This slows down digestion, absorption, and last but not least... the effectiveness of elimination (detoxification).


The Difference between
Aerobic and Anaerobic
Respiration

Respiration is the active transportation and transmutation of chemicals within a living unit. Such that energy, a desired byproduct, is created, and with it the organism is able to produce movement.

An animal cell, such as the human's cell, thrives in the presence of Oxygen. The process of cellular respiration, that utilizes Oxygen in a cascade of energy production mechanisms, is called Aerobic Respiration.

In the absence of Oxygen, cells switch to a less efficient mode of respiration called "Anaerobic Respiration". It is less efficient, since the quantity of energy units - ATP - that is created, is drastically reduced (from 36 ATPs to 2 ATPs).

Taking a look at the illustration; in the absence of oxygen, energy is only created at the stage of Glycolysis. If Oxygen is present, the by product of glycolysis (Pyruvic acid) will enter the Mitochondria. In the absence of Oxygen, the by-products of glycolysis are recycled and fermentation results.

Traditionally all foods man ate were raw or processed by fermentation. The processing seen in the western lifestyle has neglected the wisdom of our ancestors, which took careful measures in processing grains, legumes and vegetables into forms of food considered "pre-digested by bacteria", also known as Fermented Food.

Man's neglect of this wisdom was caused by the invention of a technological preservation device - the Refrigerator. Prior to these Fridges, man would let his food dry out or let sit and ferment in a brine, so food would be available to him during the winter times, when the earth is too cold and conditions wouldn't allow food to grow in large amounts.
It is a factor, that digestion is only accomplished by microbial consumption of raw materials. Their byproducts - the building blocks of the raw materials. Like the egg yolk, which has no proteins, but rather has the building blocks of proteins - Amino Acids - is so freely bioavailable for absorption by the absorption cells in the digestive tract, that no extra digestive energy is required for processing it.

Imagine how wonderful it is to relieve the digestive tract from such high energy demands. The leading cause for delayed healing and recovery from injury and illnesses is exactly that, hardly no recovery time. Rest is imperative for healing, and when you allow the gut to rest, instead of consuming 60% of the energy in the body for digestion, it can utilize less and the organism directs the growth and repair to brain cells, lungs cells, and every other cell in the body that is screaming with pain signals of attention. 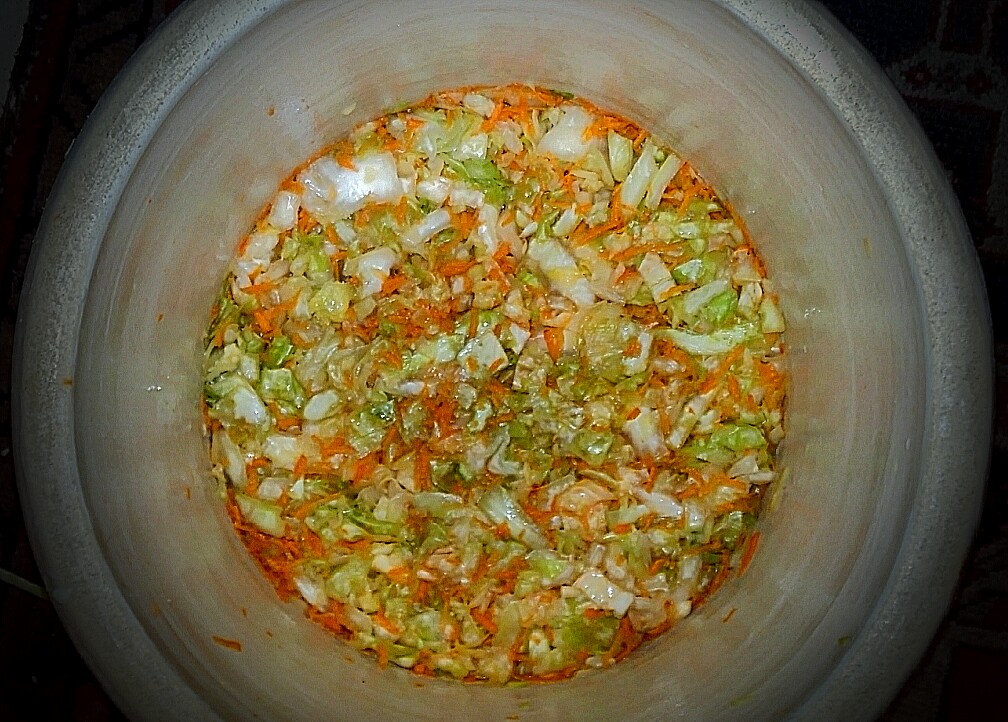 External fermentation, like fermenting a Cabbage to make Sauerkraut, is a delicacy that not only delivers bacterial populations, but also frees the vitamin C from the tough to digest plant cell, and makes many of the plant structure available as building blocks. When that hits the small intestines... walla! fast absorbing nutrients to nourish the residential microbial and cellular populations.

When the first line of cells are happy with the environment created by the fermented foods, the growth mode remains on and thus the gates are wide open for deeper layers of tissues and organs to receive a refreshing flood of nutrients.

External fermentation complements the organism, by pre-digesting raw materials and making many large materials available in their building block form. This also releases gases, but at least not inside a confined space like the intestines and colon, thus preventing the buildup of gaseous pressures within the bloodstream, that can otherwise lead to gases being locked up inside cells (see The Blood Gas Theory).

Traditionally, we used bacteria and yeasts to digest gluten in the production of sourdough bread. This breaks down the gluten protein, bit by bit, into available free-form amino acids. It is only our conventional methods practiced today that skip the wisdom of proper fermentation, and many people suffer from illnesses due to gluten toxicity. Proper leavening of bread from a whole grain neutralizes the toxins and makes the B vitamins in the bran available for utilization by other organisms.

Digestion is a process leading to elimination. Raw materials are blocks to be mined, like a gold mine, which extracts the prize and eliminates the wastes. Taking steps to locate a gold mine results in less wastes and better yield from the energy utilization in the process of extraction. As goes with food choices, as you can certainly benefit from reducing gaseous wastes and toxins by employing physiologically complementing organisms, who can accomplish for you an initial processing to your food, that would otherwise be called to the intestines during internal digestion, in order to mitigate the heaviness of the meal.

Teacher at Evolved Ministry online Self Mastery University
Posted by Unknown at 10:57 AM